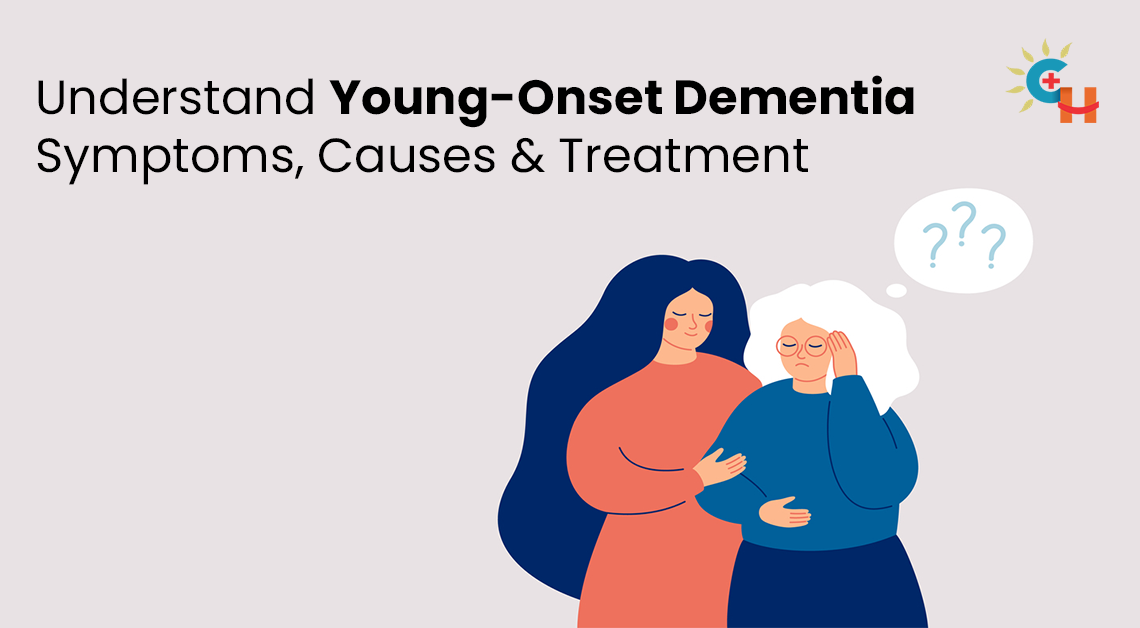 Dementia is a term that refers to a set of symptoms that impact a person’s memory, reasoning, and social abilities to the point where it interferes with their regular activities. It also affects behaviour, feelings, and relationships with others. Dementia isn’t caused by a single specific disease, but it can be caused by a number of them. Memory loss is a common symptom, however, isn’t always a mark of dementia, but it is generally one of the first symptoms.
Dementia is a serious public health problem that is becoming more prevalent today. The great prevalence of dementia in the elderly, on the other hand, may overshadow the significance of its occurrence in younger people. This is termed Young-onset dementia or in other words ‘dementia at a young age’. Follow through the blog to get more information on causes, symptoms, diagnosis, and treatment of young-onset dementia.

What is Young-Onset Dementia?

When symptoms of dementia appear before the age of 65, usually between the ages of 30 and 65, it is referred to as ‘young onset dementia.’ It’s also known as ‘early onset’ or ‘working age’ dementia, but both words are sometimes used interchangeably. Young early-onset dementia means the beginning stages of dementia, while ‘working age’ is becoming less defined as retirement ages became more flexible.

Early signs of young-onset dementia are not often recognized and may be attributed to other factors such as depression, stress, menopause, physical health difficulties, and relationship challenges, as dementia is frequently and incorrectly linked with old age. This can cause a substantial delay in receiving an accurate diagnosis and necessary care (on average four years). This can have a detrimental impact not only on the life of the person with dementia but also on the lives of their entire family.

What are the Causes of Young-onset Dementia?

Dementia is caused by damage to the brain. There could be many causes associated with it like:

What are the Symptoms of Young-onset Dementia?

Memory loss may not be one of the first signs of young-onset dementia. Symptoms vary from person to person depending on the type of dementia they have and the regions of the brain they are affected by.

Therefore, the young-onset dementia symptoms may include changes in:

These are the signs of Dementia at a young age. Furthermore, the person may not recognize the changes or be hesitant to acknowledge that something is wrong while they are generally healthy, delaying their visit to the doctor.

What do you need to do for Young-onset Dementia?

The family and individuals need to follow through with the following during the problem of dementia:

Early recognition of signs and symptoms

Early detection and precise diagnosis of dementia, together with appropriate specialized assistance, can help people with young-onset dementia and their families feel less distressed.
It is a good idea to schedule an appointment with a doctor if you have any doubts. Seeing a doctor early on can help to alleviate anxiety and provide answers.

How to Prevent/Treat Dementia?

There is no proper cure for dementia so far. There are, however, remedies and support services available to those suffering from the illness. Drug and non-drug treatments, as well as support, activities, information, and advice, are all easily and readily available for the patients.

There are also non-drug treatments that can be used. Counselling may assist some younger people with dementia with their diagnosis. These sessions can help in coping up with the behavioural changes that a person may face during young-onset dementia. Healthcare practitioners have been successful in assisting patients in maintaining cognitive health, controlling behaviour, and slowing down the progression of the disease. Other things include staying physically active, eating a well-balanced diet, abstaining from smoking, and drinking alcohol in moderation.

The key element in the treatment of young-onset dementia is support. Connecting with support groups can help you find information, acquire a better knowledge of your disease, and learn how to adapt. Always remember that you’re not alone. Support options may differ depending on where you live, but you can always find it whenever you need it. In the early stages make sure that you and your family learn and adapt to the situation and find needful ways to cope with it. With good resources and support the disease is not that big a threat.