Do you know what Influenza is? Is this a viral infection? 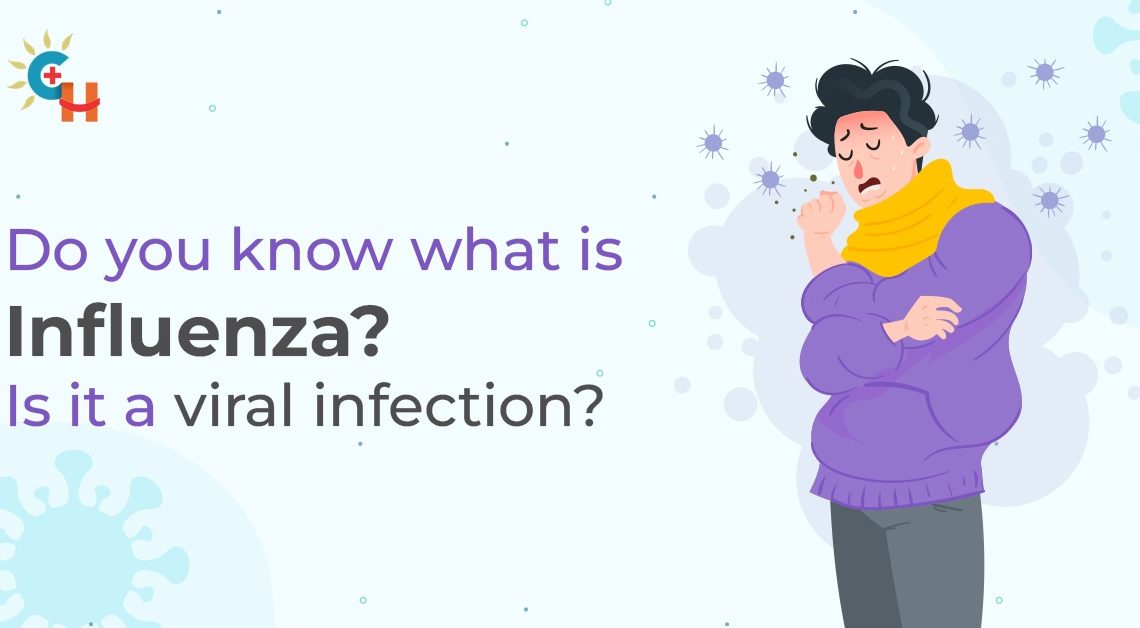 Do you know what Influenza is? Is this a viral infection?

Influenza is a virus that affects your respiratory system, which includes your nose, throat, and lungs. The majority of the infected people, recover from the flu on their own. Human-infecting influenza viruses are divided into three categories: A, B, and C.

Type A influenza infection can be dangerous, resulting in widespread sickness and outbreaks. However, influenza and its consequences might be fatal in some cases if not taken properly care of.

The following category of people are at a higher risk of getting influenza:

When someone with influenza coughs, sneezes, or talks, the virus spreads through the air. A person might directly inhale the virus in the air or one can also pick up germs from an object (such as a phone or computer keyboard) and then transmit it into their bodies through the eyes, nose, mouth, etc.

People infected with the virus are likely contagious from the day before symptoms begin to five days after they appear. Children and others with compromised immune systems may remain contagious for a longer period of time.

If you’ve already had influenza chances are, your body has already produced antibodies to combat the strain of the virus. If future influenza viruses are similar to those you’ve already encountered, either through infection or vaccination, those antibodies may help prevent or minimize the severity of infection.

The four types of Influenza viruses are – A, B, C & D. influenza A, and B viruses cause seasonal epidemics of illness (known as flu season) practically in the winter. The only influenza viruses known to generate pandemics or worldwide outbreaks of flu, are influenza A viruses. Infections with the influenza C virus usually cause only mild disease and are not thought to create human epidemics. Influenza D viruses are mostly found in cattle and are not known to infect or sicken humans.

The flu may appear to be a normal cold at first, with a runny nose, sneezing, and a sore throat. Colds, on the other hand, normally take time to develop, whereas the flu strikes rapidly. And, while a cold might be a bit irritating, the influenza flu usually makes you feel much worse.

The following are some of the most common flu signs and symptoms:

According to the Centers for Disease Control and Prevention (CDC), Everyone over the age of six months should get a flu vaccine every year. The flu vaccine can reduce your risk of getting the flu and its severity, as well as your chances of developing a serious illness as a result of some existing illness.

At this time the flu vaccination is especially crucial because flu and coronavirus disease 2019 (COVID-19) share some common symptoms. The flu vaccine may help to minimize symptoms that are similar to those caused by COVID-19. The number of patients who need to stay in the hospital could be reduced if the flu could be prevented. The seasonal flu vaccine protects against four influenza viruses that are projected to be the most prevalent during the flu season. The flu vaccinations are also available as an injection and a nasal spray.

You can also do the following to prevent the spread of the influenza virus:

When to Consult a Doctor?

The majority of individuals who have the flu can treat it at home and do not need to see a doctor. If you have flu symptoms and are concerned about complications, make an appointment with your doctor very once. Antiviral medications can help shorten the duration of your sickness and prevent more serious complications. If you’re experiencing flu-like symptoms, seek medical attention immediately.

Emergency signs and symptoms in adults may include:

Emergency signs and symptoms in children may include:

Small steps of prevention on your part can help minimize a bigger problem. Influenza is a common disease and its remedy is also available, but it also becomes fatal if it keeps increasing. Hence, proper medication, self-care, and prevention are necessary to reduce the pandemic that could be caused as an effect of the spread of Influenza.